Do Catholics Worship Images of Christ? 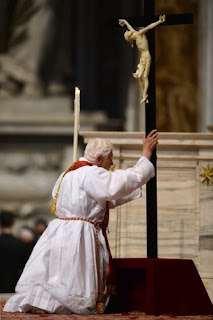 The Christian veneration of images is not contrary to the first commandment which proscribes idols. Indeed, "the honour rendered to an image passes to its prototype," and "whoever venerates an image venerates the person portrayed in it." The honour paid to sacred images is a "respectful veneration," not the adoration due to God alone: Religious worship is not directed to images in themselves, considered as mere things, but under their distinctive aspect as images leading us on to God incarnate. The movement toward the image does not terminate in it as image, but tends toward that whose image it is. [2]

We should note several important points:

1. We understand that Catholics are not supposed to honour the image itself, as a mere physical object; that would be crass idolatry. However, they are called to venerate the image, not as a thing, but only as far as it is an image. Can this distinction be made in practice; this is another point for further discussion.

2. The Church teaches that the honour given to the image passes on to the person represented by the image; or perhaps we can say, Catholics honour the saints and angels through honour rendered to their images. The Council of Trent (session 25) explains:

... the honor which is shown them is referred to the prototypes which they represent, so that by means of the images which we kiss and before which we uncover the head and prostrate ourselves, we adore Christ and venerate the saints whose likeness they bear. [3]

3. The church distinguishes between the worship and adoration of God (latria) and the lesser form of honour, or veneration (dulia), given to saints and angels. Thus a statue of St Paul should not be worshipped (latria) but simply honoured (dulia). On this account, it would be contrary to Catholic teaching to worship the image of a saint. The image of St Paul should be venerated, not worshipped. "The honour paid to sacred images is a 'respectful veneration,' not the adoration due to God alone."

At this point, a series of questions spring to mind: What about images of Christ, who is God incarnate? If the veneration given to the image of a saint passes on to the saint, what kind of honour should be given to the image of Christ? Surely, Christ deserves more than mere veneration of the dulia type. Being God, Christ deserves to be honoured with the highest form of worship and adoration (latria). If Christ's image is merely venerated, isn't that honour far less than the adoration he is worthy to receive? Shouldn't then the image of Christ – if Catholic theology is correct – be honoured with the highest form of worship (latria), given that this worship to the image passes on to the Person represented? In other words, if saints can be honoured (dulia) by honouring (dulia) their statues, should God incarnate by worshipped (latria) by worshipping (latria) his image? That seems to be the logical conclusion!

Someone may object, saying, "That's only your fallible interpretation; you are misrepresenting Catholic teaching." Well then, look again at the sentence quoted above from the Catechism.

Religious worship is not directed to images in themselves, considered as mere things, but under their distinctive aspect as images leading us on to God incarnate.

This statement denies images are worshipped "in themselves" and "as mere things". That is quite obvious: Catholics do not intentionally worship wood and stone, but the same sentence continues to affirm that images are worshipped "under their distinctive aspect as images". Images of God incarnate are worshipped according to the Catechism. The Catechism is actually quoting from St Thomas Aquinas. In the same paragraph, Aquinas concludes that "religious worship is paid to the images of Christ." [4] In his discussion of the question, "Whether the image of Christ should be adored with the adoration of latria", Thomas Aquinas is even more explicit. Excerpts:

One would hope that Catholic apologists would be as clear and honest as Thomas Aquinas in saying publicly, "We give the adoration of latria to the image of Christ." What they call "ridiculous" is, in fact, the teaching of their own Church! I appeal to Catholics and Evangelicals alike, not to be deceived by a watered-down version of Catholicism presented by modern apologists.

I have not tried to show from Scripture whether it is legitimate to worship images of Christ – that, Lord willing, we'll do another time.

You Shall Not Bow Down
The Second Commandment