Why have you forsaken me? 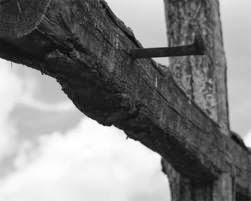 Have you ever felt lonely and abandoned even by your own friends and relatives? Maybe you have experienced moments when apparently even God hid his face from you.

The Lord Jesus suffered the anguish of solitude far beyond anything we can ever know. On the cross he prayed,  “Eli, Eli, lema sabachthani?” that is, “My God, my God, why have you forsaken me?” (Mattew 27:46).  A more painful and mysterious cry has never issued from human lips.

Prior to this, Jesus had said, “Father, forgive them.” We immediately understand this plea because it accords with his goodness, even towards those who hated him.

Then he said to the malefactor nailed beside him, “Today you will be with me in Paradise.” We also understand this promise because it is in harmony with his mercy and forgiveness towards all those who repent and turn to him.

Again, he said to him mother, “Woman, behold your son.” It is unthinkable that Jesus would not make provision for his dear mother after his departure. He entrusted her to his beloved disciple, John, to take good care of her.

But the next time he opened his mouth, Jesus uttered these startling words, “My God, my God, why have you forsaken me?”  Many centuries before, the Psalmist had declared: “I have been young, and now am old, yet I have not seen the righteous forsaken” (Psalms 37:25). Yet on the cross the Righteous One was forgotten by God - He who never committed the least sin, who unfailingly obeyed the whole will of God, and in whom the Father was well-pleased. In that dark hour the Father left the Son on his own.
Why? How can God the Father turn away from his beloved Son?

The Father forsook him because “for our sake he made him to be sin who knew no sin” (2 Corinthians 5:21); “the Lord has laid on him the iniquity of us all” (Isaiah 53:6). He forsook him because God is “of purer eyes than to see evil and cannot look at wrong” (Habakkuk 1:13) – even though the sin he bore was not his own.

The sin was ours; we deserved the punishment, we deserved to be rejected from God’s glorious presence and cast into the outer darkness. But Christ took upon himself the sins of his people and suffered as our substitue. He was punished in our place.

God forsook him so that we, who trust in his Son, may not be exiled eternally from his presence. He forsook him for a time so that we may enjoy God forever – because after the darkness of that hour dawned a glorious new day when God raised up his Son.

There is no need to be alone, separated from our Creator because of sin. Christ suffered on the cross in order to deal with sin, clear it out of the way and reconcile us with the Father. God embraces us with love when we go to him through his Son Jesus.