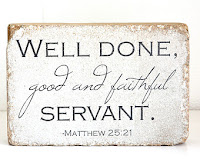 Without exception every person will appear before the judgement seat of God. The Lord will divide humanity into two groups: the wheat and the tares; the sheep and the goats; the saved and the lost. Jesus solemnly warns that some professing Christians will be revealed as hypocrites when their evil works are exposed, and they will be lost.

What about genuine Christians who sincerely believe in Jesus Christ, trusting him for salvation, who hate sin and strive to please God? Why should they give an account of their lives to God? Is it to determine whether they had made it to heaven or not?

No! Christians do not have to wait until Judgement Day to know whether they have eternal life or not. They already have eternal life. "These things I have written to you who believe in the name of the Son of God," writes the apostle John, "that you may know (present knowledge) that you have (present possession) eternal life" (1 John 5:13).

Isn't that amazing? Believers can know by God's Word that they possess eternal life. They can know now, even during their life on earth. Eternal life is the gift of God (Romans 6:23) that he gives to his children from the moment they believe in his Son.

Christians do not stand before God so that it would be decided whether they are justified (declared just) or condemned (declared guilty). The Bible assures believers that they are already justified: "Therefore having been justified by faith, we have peace with God through our Lord Jesus Christ" (Romans 5:1). "Having been justified" - something that has already happened. God has already declared every believer "justified" on the basis of what Christ has done for them.

They are not judged for their sins at that time because their sins have already been paid for by Christ on the cross. That is why Jesus can reassure his people that they already have eternal life and that they "shall not come into judgement" (John 5:24).

So why stand before the judgement seat of Christ at all? The Bible teaches that they will be rewarded for their good works during their lifetime. Christ "will reward each according to his works" (Matthew 16:27). He promises, "Behold, I am coming soon, bringing my recompense with me, to repay each one for what he has done" (Revelation 22:12).

Christians do not dread the Day of the Lord. It is their graduation day rather than an arraignment before a criminal court. They make it their aim to please their Lord and eagerly await his return. It is not an appointment with an angry judge but with their beloved Spouse.