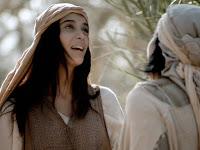 Mary trusted in God for salvation, just as she happily confessed in the Magnificat, “My spirit rejoices in God my Saviour” (Luke 1:48).

When our first father Adam sinned, the entire human race fell with him into sin. Together with David, we can all confess, “Behold, I was brought forth in iniquity, and in sin did my mother conceive me” (Psalm 51:5). Similarly, the Apostle Paul taught that Adam’s sin had repercussions on all humanity: “one trespass led to condemnation for all men” (Romans 5:18). In Christian theology this is called “original sin.”

During church history it was debated whether Mary was tainted by original sin. Many Christians still believe that all people, including Mary, are conceived in sin. In the nineteenth century the Roman Catholic Church defined the dogma of the Immaculate Conception, namely that Mary was preserved from all stain of sin from the first moment of conception.

Even though there is disagreement on the time when Mary was redeemed, whether at conception or later on in her life, there is agreement within Christendom, including the Roman Catholic Church, that Mary was in fact redeemed by the grace of God and the merits of Jesus Christ (see Catechism, 491).

Mary needed redemption and so do we. Mary’s Saviour is also the Saviour of all who have recourse to God for mercy. Mary did not look to herself, to what she could do, to her own merits, or to some other creature. Mary trusted wholeheartedly in God for salvation.

We ought to do the same. Let us forget ourselves. Let us forget other creatures. Let us look up to heaven and entrust our souls to God. True, we have sinned, and we merit God’s wrath and judgement. Yet the same God sent his beloved Son Jesus, immaculately conceived by the power of the Holy Spirit in the womb of the virgin Mary, to give his life as a ransom for many - for his mother and for all those who like Mary trust in God to liberate them from sin.

Then we will also experience the same joy and gratitude that Mary expressed by the words, “My spirit rejoices in God my Saviour.”