Confession to a Priest 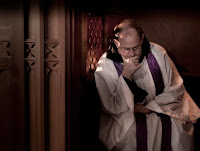 Confession to a priest is not a biblical practice; it is not even a custom of the early church.

Our Lord taught us to confess our sins directly to God the Father. He told us to pray, "Our Father in heaven...forgive us our sins as we forgive those who trespass against us." Reading the New Testament we do not find a single instance of the apostles hearing private confession; nor do we find the disciples confessing to a priest.

There was no auricular confession to a priest in the early church either. Augustine gives us a snapshot of the church in the 4th and 5th century. In his Sermon to Catechumens on the Creed, Augustine writes:

“When ye have been baptized, hold fast a good life in the commandments of God, that ye may guard your Baptism even unto the end. I do not tell you that ye will live here without sin; but they are venial, without which this life is not. For the sake of all sins was Baptism provided; for the sake of light sins, without which we cannot be, was prayer provided. What hath the Prayer? "Forgive us our debts, as we also forgive our debtors." Once for all we have washing in Baptism, every day we have washing in prayer. Only, do not commit those things for which ye must needs be separated from Christ's body: which be far from you! For those whom ye have seen doing penance, have committed heinous things, either adulteries or some enormous crimes: for these they do penance. Because if theirs had been light sins, to blot out these daily prayer would suffice.” [link]

How did Christians deal with sin at that time? They dealt severely with those who committed grievous sins, casting them out of the church. A period of "penance" was required before the repentant sinner was re-admitted. But what about the daily sins that all Christians commit? Did they confess them to a priest? No, they confessed directly to God in prayer, asking the Father for forgiveness. Prayer was considered sufficient for daily cleaning.

The Catechism of the Catholic Church admits that private confession first came on the scene in the seventh century:

“Over the centuries the concrete form in which the Church has exercised this power received from the Lord has varied considerably. During the first centuries the reconciliation of Christians who had committed particularly grave sins after their Baptism (for example, idolatry, murder, or adultery) was tied to a very rigorous discipline, according to which penitents had to do public penance for their sins, often for years, before receiving reconciliation. To this ‘order of penitents’ (which concerned only certain grave sins), one was only rarely admitted and in certain regions only once in a lifetime. During the seventh century Irish missionaries, inspired by the Eastern monastic tradition, took to continental Europe the ‘private’ practice of penance, which does not require public and prolonged completion of penitential works before reconciliation with the Church. From that time on, the sacrament has been performed in secret between penitent and priest. This new practice envisioned the possibility of repetition and so opened the way to a regular frequenting of this sacrament. It allowed the forgiveness of grave sins and venial sins to be integrated into one sacramental celebration. In its main lines this is the form of penance that the Church has practiced down to our day” (Catechism of the Catholic Church, paragraph 1447).

So, private confession was introduced a full seven centuries after Christ and His apostles. Ironically the Roman Church curses us if we dare assert the plain historical fact that secret confession to a priest was not observed from the beginning:

“If anyone denies that the sacramental confession was instituted, and is necessary for salvation, by divine Law; or says that the manner of confessing secretly to a priest alone, which the Catholic Church has always observed from the beginning and still observes, is at variance with the institution and command of Christ and is a human invention, anathema sit” (Council of Trent, Session 14, Canon 6).

Friend, I urge you to disregard Rome’s vain threats; you cannot deny the truth. If you want to follow the teaching of the Bible, and the practice of the early church, stop once and for all going to private confession to a priest. Pray to God. He knows your heart and He hears your prayers. God will certainly save you if you repent and believe in His Son, Jesus Christ, and the Father will continue to forgive your sins as you ask him in humble prayer.
Email ThisBlogThis!Share to TwitterShare to FacebookShare to Pinterest
Newer Post Older Post Home