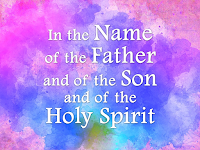 Our belief in one God is fundamental; Christianity is a monotheistic religion. The Old and New Testaments both assert the unity of God: ‘Hear, O Israel: The LORD our God, the LORD is one!’ (Deut 6:4); ‘I am the First and I am the Last; besides Me there is no God’ (Isa 44:6); ‘There is one God, and there is no other but He’ (Mark 12:32).

Non-Christians believe in many different gods but we do not acknowledge them as true. We take the first commandment seriously: ‘You shall have no other gods before me’ (Ex 20:3). Christians deny polytheism (belief in many gods) and all other gods beside our true and living God because ‘all the gods of the peoples are idols’ – false gods (Ps 96:5; 1 Cor 8:5, 6).

God is often called Father. ‘Blessed be the God and Father of our Lord Jesus Christ’ (Eph 1:3). God is not Father because of his created sons (the angels), or his adopted sons (his redeemed children); rather, he is Father because of the eternal relation with his only-begotten Son. God is Father from eternity, from before the creation of the world, because he was ever with the Son. The Lord Jesus prayed: ‘And now, O Father, glorify Me together with Yourself, with the glory which I had with You before the world was’ (John 17:5). Since he cannot be Father without the Son, whoever denies that the Son is eternal, also denies the Father.

The Bible teaches explicitly that the Son is God and is equal with the Father. Every Christian looks to Jesus Christ and, just like the apostle Thomas, confesses: ‘My Lord and my God!’ (John 20:28). We will have the opportunity to see how Scripture affirms the full deity of Christ because he is called by divine names, and divine qualities are ascribed to him. Scripture also teaches that Christ performs such works as only God can perform. The worship given him and the trust expressed in him by his disciples are further indications of his deity.

We will also see how Scripture presents the Holy Spirit as fully God. He is given the names and attributes of God himself. He also performs works as only God can perform. Besides, Scripture also shows that he is a person, not a mere force: he speaks, grieves, loves, chooses, sends and teaches, such activities as only a person can perform.

Though the truths that form the doctrine of the Trinity are not difficult to grasp separately, it is extremely difficult to understand how the three Persons are one God. During the early centuries of the Christian era, the church endeavoured to give a correct definition of the relationship between the three Persons while maintaining the unity of God. This was done amidst a proliferation of heretical ideas:

1. Arianism is the denial of the deity of Christ. Early in the fourth century, a presbyter named Arius taught that the Son was a created being. Arius was opposed by Athanasius who proved from Scripture that Jesus is eternal, uncreated and fully God. The Council of Nicea (325 AD) affirmed the deity of Christ, stating that the Son is ‘of the same substance’ (homoousious) with the Father.

2. Modalism is the idea that God is one person who revealed himself at different times as the Father, the Son, and the Holy Spirit. Modalism ‘confounds the persons’, comparing God to an actor who assumes different roles at different times. However, the Bible teaches that the three Persons co-exist at the same time. For instance, at his baptism, when Jesus came out of the water, the Holy Spirit descended upon him, and the voice of the Father was heard from heaven.

3. Tritheism is the idea that there are three separate gods who are united only insofar as they have a common purpose. Tritheism contradicts the monotheistic (‘one God’) doctrine of the Bible, which is expressed accurately in the Athanasian Creed: ‘We worship one God in trinity, and trinity in unity. Neither confounding the persons (as modalism does), nor separating the substance (as tritheism does). For the person of the Father is one, of the Son another, and of the Holy Spirit another. But of the Father, of the Son, and of the Holy Spirit there is one divinity, equal glory and co-eternal majesty.’

There is no correct analogy of the Trinity. ‘To whom then will you liken God? Or what likeness will you compare to Him?’ (Isa 40:18). If we compare the Trinity to anything, we end up with a false picture of the true God. Christians do not believe in the Trinity because we are able to fully understand the being of God, but because we are convinced that the Bible teaches the unity of God, the deity of the three Persons, and their distinction from each other.

The Trinity and Salvation

Knowing God as a trinity of persons is closely connected with our experience of salvation. As Christians, we believe that we are ‘elect according to the foreknowledge of God the Father, in sanctification of the Spirit, for obedience and sprinkling of the blood of Jesus Christ’ (1 Pet 1:2). For that reason, we are baptised ‘in the name of the Father and of the Son and of the Holy Spirit’ (Matt 28:19). We are not baptised in three names, but in the singular name, for God is one. At the same time, we acknowledge that this one God is the Father, the Son and the Holy Spirit. We worship one God, and experience blessings from each of the three persons: ‘The grace of the Lord Jesus Christ, and the love of God, and the communion of the Holy Spirit’ (2 Cor 13:14).

Those who deny the Trinity jeopardize their salvation. How can anyone invoke the name of Jesus for salvation if he does not believe that he is truly God? God declares that he alone is Saviour. ‘I, even I, am the LORD, and besides Me there is no saviour’ (Isa 43:11). How can anyone who sees Jesus as a mere creature claim to know God since the Bible teaches that the glory of God is known only in the face of Christ? ‘You know neither Me nor My Father,’ Jesus told the Jews who had rejected him, ‘If you had known Me, you would have known My Father also’ (John 8:19). It is to be expected that the same people who deny the Son would also deny also the Holy Spirit because, as Jesus himself said, ‘the world cannot receive [the Spirit], because it neither sees Him nor knows Him’ (John 14:17).

We cannot conclude that everyone who has an intellectual knowledge of the Trinity is really a believer. On the other hand, a true child of God is known by the worship and love he expresses towards God the Father, his trust in the Lord Jesus Christ, and the righteousness and holiness wrought in him by the Holy Spirit. Christians are Trinitarian to the very core of their being.
Email ThisBlogThis!Share to TwitterShare to FacebookShare to Pinterest
Newer Post Older Post Home